To reactivate some performance skills, I have taken up singing lessons. Here are a few key dates and details.

4 September 2019 – Tuition started with Katie Johnson. One of the early priorities was to learn the score of the bass part of the Brahms Requiem, since le Motet was to rehearse the work over 6 weeks and there is a lot of choral work in it. I prepared for and was (nervously) successful in an addition on 1 October for inclusion in le Motet contingent.

The year 2019 marked the 50th anniversary of a production of Faust, where I was on stage with Susan Gorton, who later went on to sing with the D’Oyly Carte Opera Co. and was my sister’s singing teacher. (I was also on stage at secondary school in another production with Ian Curtis of Joy Division, but I digress.) The “don’t make it easy” principle then came into play, because I remembered Valentine’s aria and have been singing it for years in the shower and elsewhere. So, I thought it would be a good idea to try it. It was delivered in 1969 in English as “Even bravest heart may swell” in the translation of H.F. Chorley. There is a LOT more text in the French original, added to which the range is high for most baritones, but I persevere, nonetheless!

Other pieces we are working on include: Arthur Sullivan’s “Gone” (from Tennyson’s the Window or Songs of the wrens); “Le secret” of Gabriel Fauré; Shakespeare’s “O mistress mine” set again by Sullivan (are there signs of an obsession here?); and Cole Porter’s “Ev’ry time we say goodbye”. 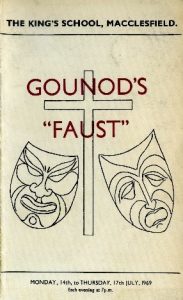 Following a long gap I took up the clarinet again in June 2018. Here are a few key dates and details.

18 September 2019 – Tuition started with Marius Filip at the International School (La Grande Boissière campus) in Geneva, which offers the opportunity to take the UK Associated Board of the Royal Schools of Music (ABRSM) grade 7 exam. The set pieces I am preparing are the Romance No. 1 by Schumann; the Pièce en forme de Habañera by Ravel, and an Allegro con spirito study by Backofen. There are LOTS of scales, arpeggios, dominant and diminished sevenths to learn, not to mention aural and sight-reading tests. I am glad to have made some progress with Marius, but there is still more work to do!

31 August 2019 – Former tutor, Stefano, and I participated in a scratch orchestra held in the grounds of the Belle-Idée Hospital. It was great fun playing Dvorak’s Danse slave and three arias from Mozart operas (at least those featuring clarinets).

22 May 2018 – I signed up with Stefano Cirrito, head of Musique Genève, to reacquaint myself with the instrument, using tutors such as Lefèvre and Langey, and playing ensembles at year-end and summer concerts with fellow students, Anja Bielfeld and Didier Sculati.

Following an audition by Romain Mayor in August 2018 (singing the Sentry’s song from Iolanthe, a rarity on the continent!), I was accepted as a bass–baritone in Le Motet, a choir established in Geneva in 1926, and with a backlist of recordings with the Orchestre de la Suisse Romande (among others). The choir also recorded part of the soundtrack for Lord of the Rings.

Currently, the choir is preparing François d’Assise by Messaien. We will form part of the chorus at the Grand Théâtre.

There follow, most recent first, a few details of past concerts in which I have participated.

19 January 2020 – The Creation of Haydn. The choir did a flashmob performance, 7 January, of choruses in a local bookshop and at the main railway station as part of the promotion for this concert.

16 November (Geneva) and 10 November (Lausanne) 2019 – The chamber choir incarnation of Laudate Deum (with whom I formerly sang in the big choir), invited le Motet to join forces to perform the German Requiem of Brahms. My father died some weeks before these performances, which made the experience particularly poignant. This was a very successful collaboration and I was very glad to have the opportunity to work with Catherine Berney (LD choir mistress), Guillaume Berney (conductor) and my former colleagues again. Le Motet prepared the work in six weeks; no mean feat, since the chorus plays a very large role in this work. All Motet members wishing to perform were auditioned for this project. The programme was completed by the Alto Rhapsody by the same composer.

21 June 2019 – As part of Geneva’s Fête de la musique, Le Motet performed the Messe solennelle by Jean Langlais (late organist of Sainte-Clothilde, Paris) as well as a reprise of the Three songs of Claude Debussy from November 2018. It was great to introduce this programme to an audience discovering “classical” music – they applauded between movements (nothing wrong with that). The Cantique of Jean Racine by Fauré was given as an encore.

17 March 2019 – The first half of the concert was devoted to two works by Brahms – The Song of Destiny and Song of the Fates – and the rarely given Night Song of Schumann, during rehearsals for which I discovered I can reach a low E below the bass clef! The Schumann first symphony concluded the programme.

11 November 2018 – Le Motet performed a programme of French music for choir and in most cases piano, although the Three songs of Claude Debussy, settings of poems by Charles d’Orleans, were a capella. 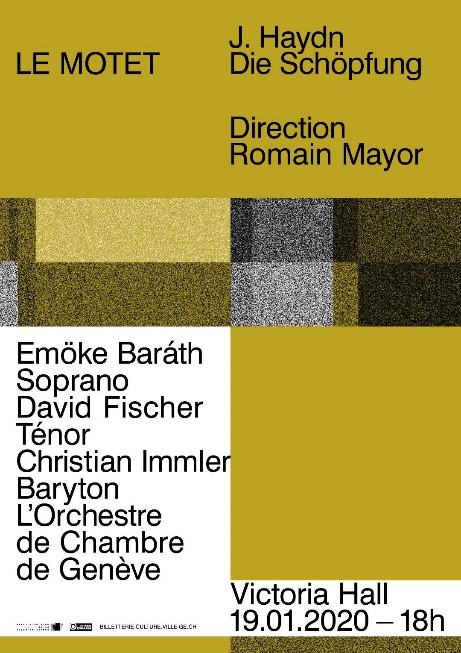 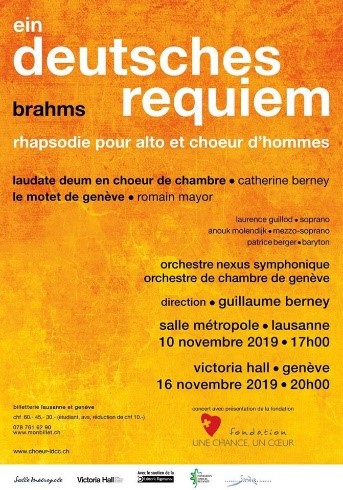 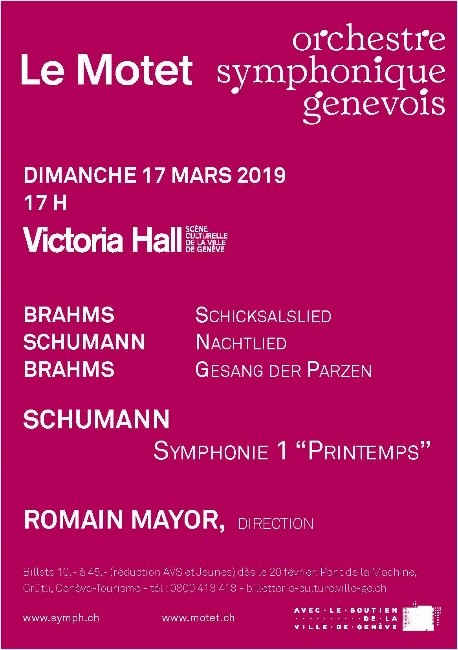 21 March 2018 – Laudate Deum in its “big choir” incarnation gave its last concert in Lausanne. It was a great experience to première the Credo of James MacMillan in Switzerland and to sing the C minor Mass and Misericordias of Mozart. 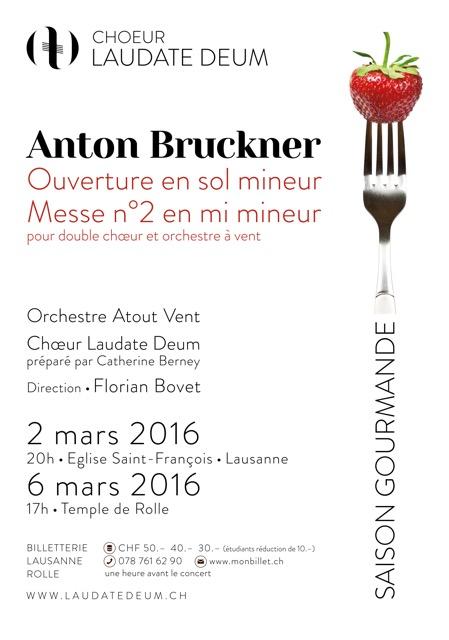 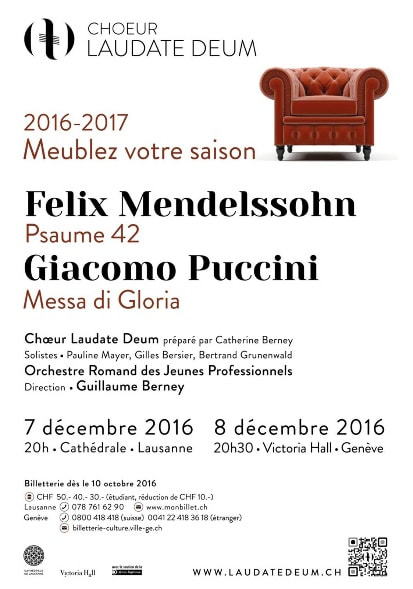 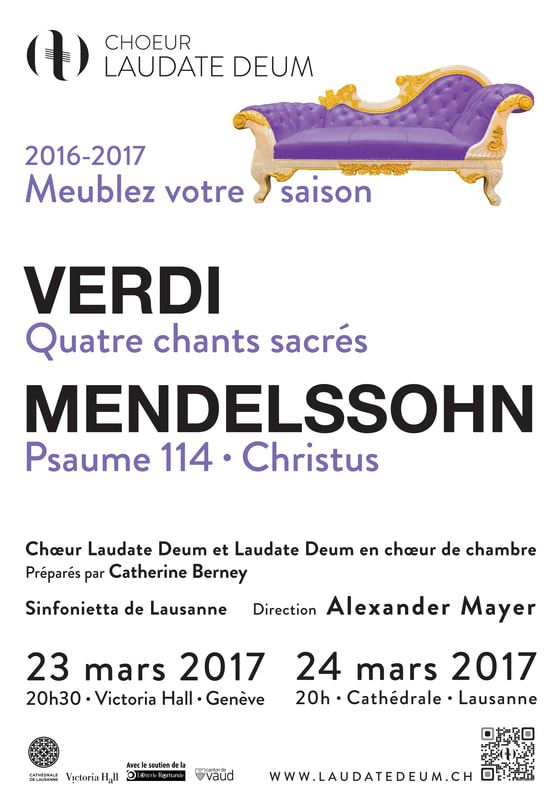 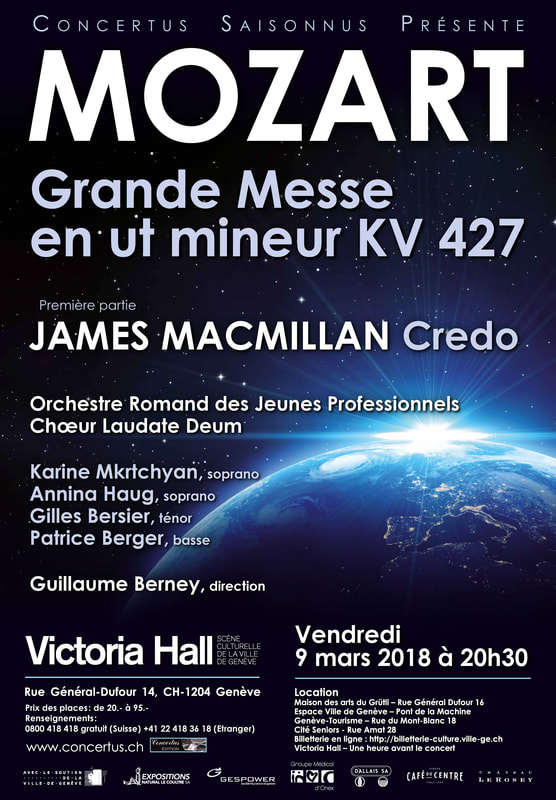 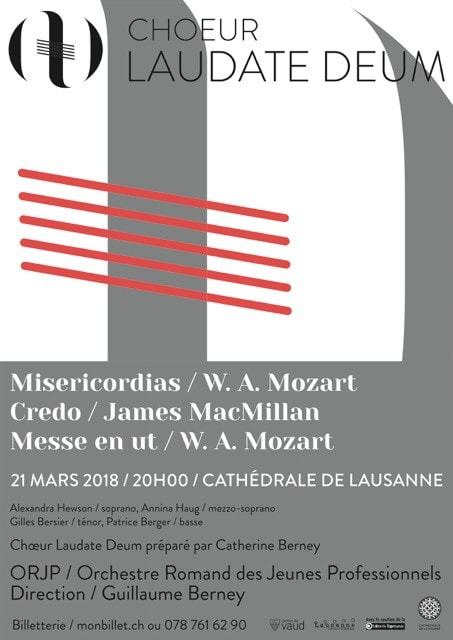 ​14, 18, 21 November 2015 — Three concerts consisting of a programme of works by Brahms and the Mozart Requiem were held in the Victoria Hall, Geneva; the Cathedral, Lausanne; and the Grossmünster, Zürich. The Requiem was dedicated to those murdered in Paris on 13 November. Extra seating was added for Lausanne, with the audience exceeding 800. The Geneva audience numbered about 550.
​
The programme started with the Schicksalslied of Brahms, followed by the Alto Rhapsody, which earned several “Bravo!” responses in Geneva for soloist Annina Haug.

Laudate Deum is a choir I joined early in 2015, persuaded by a university contemporary who now lives in Lausanne. I have not sung in public for an extended period and was really moved when we started to rehearse with the orchestra — just fantastic!

Many choir members travelled to Zürich on a coach, an experience nearly as memorable as the concert itself! Again, it’s a while since I did that …

Owl and the pussycat

22 May 2015 — Long promised to certain former friends and colleagues, I recorded a version of the Owl and the pussycat and posted it on YouTube! I’m glad to say I had not a few positive responses and would like to thank all who took the trouble to contact me. I am planning to do a few more when I get the time!

​As someone who has spent a long time in the science, technology, and medicine publishing industry, I like to give a little in thanks for an eventful career to date. Here are a few projects I have been proud to endorse.

Aiding the crowdfunding of 201 Dance Company

​25 June 2015 — Director Andrea Walker achieved the company’s crowdfunding target today to take the show Smother to the Edinburgh, UK, Festival in August. I was happy to contact friends passionate about theatre to contribute a little and of course sent a small amount on my own account.

​27 Feb 2015 — The BBC Concert Orchestra and BBC Singers conducted by John Andrews are in course of recording these items, and I have sent a small contribution to the Sir Arthur Sullivan Society to help cover costs.

The Tempest music was the first composition to bring Sullivan to public attention in 1861−2. Written as a graduation piece for the Leipzig Conservatory, the style follows that of Mendelssohn, composer of incidental music for A midsummer night’s dream. There is already a nearly complete recording made in 1955 by the Vienna Orchestral Society under F Charles Adler, but it is not widely available.

The Macbeth production of 1888 was by Henry Irving, who omitted all scenes not involving Macbeth or Lady Macbeth! The music has never been recorded in its entirety before, although the orchestral suite of 1889 and a couple of other items are available in a recording by the RTE Concert Orchestra under Andrew Penny. There are half a dozen or more recordings of the overture alone, widely considered to be one of Sullivan’s best.

​Macmillan Cancer Support. My sister, Helen, who first had breast cancer in 2006 and then a sarcoma, was greatly helped by nurses and counsellors funded by Macmillan Cancer Support. Helen has participated in ”patient experience” meetings and has collected for the charity outside Marks and Spencer, Macclesfield. She also featured in a 2008 leaflet and their 2009 Christmas catalogue. As someone living with breast cancer, she has also had press coverage in the Daily Mail.

Helen did a charity walk around Manchester for Genesis Breast Cancer Prevention. The Genesis Breast Cancer Prevention Centre at the University Hospital of South Manchester is the first purpose-built centre of its kind in Europe and is home to a team of researchers whose aim is to tackle the problem of breast cancer through research into prevention, early diagnosis, and screening. It has the largest family history clinic in Europe for women with breast cancer in the family.

Krebsliga Schweiz: As my sister has had breast cancer in the UK, I like to support oncology research, even in Switzerland!
​
AIDS-Hilfe Schweiz: One small way in which I can help all those affected!

​Sussex Fund: Sussex changed my life. This is one of the great innovative institutions in higher education, and I still support it.

Paving the way: I attended the 50th anniversary celebrations of the university in 2011, but I have not yet seen the “paver” that I sponsored!
​
Attenborough portrait. I trod the boards a few times at the Gardner Centre, now renamed after the ex-Chancellor.

I had the opportunity to meet Tudor briefly at the birthday party of a friend of mine in August 2014. The friend refused a gift, so I asked him to nominate a charity. He suggested Momentum, for whom Tudor was doing a sponsored swim. Here’s the background.
​
The video mentions September 2013, but the swim was postponed until July 2014 due to adverse temperature conditions.

I was glad to be a partial sponsor of the first professional recording of this work in early 2013.

Sir Arthur Sullivan was unlucky for several reasons. First, much of his work was written before recording was possible (although he did make a cylinder); second, he is not considered a musical innovator (i.e. very much of the 19th century rather than the 20th); and third, the works for which he is most widely remembered, namely the Savoy operas, were regarded as neither “classical” nor “popular”, but somewhere between the two.

Not all the Savoy operas were written with Gilbert. Following the break between the two men over the so called “carpet quarrel”, which was really due to Gilbert’s anger at Carte and Sullivan collaborating on the grand opera Ivanhoe with Julian Sturgis, Sullivan wrote stage works with a number of other authors. In 1898, Sullivan’s collaborators were Arthur Wing Pinero (of Trewlawny of the Wells fame) and Joseph Comyns Carr. The trouble was, Sullivan’s collaborators did not really adapt to the needs of a “romantic musical drama”, and refused to cut the text sufficiently to accommodate the music. The result was that the show went on too late into the evening and, for this and other reasons, folded after only 50 performances. The work was largely forgotten until this recording.
​
Sullivan’s striking use of modes (rather than keys) in this work is of note (see for example pp. 27–28), and the style differs greatly from the “rum-tee-tum” (to coin a phrase) of the works with Gilbert. So Sullivan was, in this regard, an innovator.

Site powered by Who’s Who Publishers